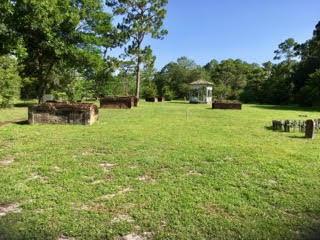 Atlantis, El Dorado, etc. These are popular lost cities as part of legends. Some of these lost cities disappearances were said to be caused by usually strong natural disasters. For example, a huge earthquake was said to sink Atlantis to the bottom of the ocean.

However, what people are not so acquainted with is Gulf County’s, in particularly Port St Joe’s, perplexing history in the 1800s and how some of the events that took place almost 200 years ago still effect Gulf County today. We are referring to a real place that has come to be called The Lost City—St. Joseph.

The Largest City in Florida—For Real?!

In 1838, St. Joseph, now called Port St. Joe, was the largest city in Florida with some 12,000 people—Port St. Joe was larger in 1838 than today even 179 years later! Wealthy businessmen from Apalachicola moved to establish St. Joseph. Unlike Apalachicola, since a major river did not empty into St. Joseph Bay, these men built a railroad to support the economy. In fact, Port St. Joe was home to the first railroad in Florida.

In 1838, because of its prominence, Florida’s constitution was drafted, not at the capital of Florida-Tallahassee, but in Port St. Joe. Six years later, Florida officially became the 27th state. The city had wealth, a beautiful environment, magnificent homes, thriving businesses, etc. How could it get any better?

When Yellow Was The New Black 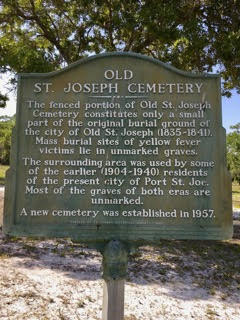 Then, in 1841, Yellow Fever blanketed the city. The illness spared no one—rich, poor, white, black, men, women, farmer, politician, child, elder, etc. After Yellow Fever struck in 1841, Port St. Joe was left with a population of only about 400 or so in 1842. While humans at this time in history seemed to thrive off of separating each other based on race, gender, etc, nature, via Yellow Fever, powerfully demonstrated and reminded everyone that all humans are equal.

Bet You Didn’t Know: To this day, Port St. Joe currently maintains segregated cemeteries—Forest Hill is used for black people and Holly Hill used for white people. Though, technically and legally, anyone today can purchase a lot in either cemetery—in practice physically, socially and culturally, the cemeteries do not mix races. The practice of segregation at death is very much alive…no pun intended.

There is also a historical cemetery in Port St. Joe that was designated for those who died due to the grievous Yellow Fever. 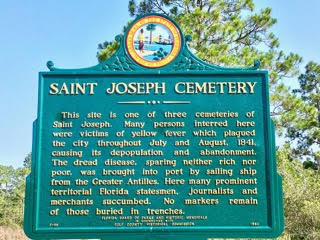 To make matters worse, in the Fall of 1841, a fire ravaged the town and forest in St. Joseph.

In 1844, a hurricane swept through Port St. Joe. This devastated what was remaining of the city. After this, Port St. Joe basically became non-existent. The storm surge was so powerful, that many people describe what happened as a “tidal wave”.

Though most people today would say that Port St. Joe was the victim of an unprecedented sequence of natural events with no divine hand attached to it, to many in the 1800s, the intense and unusual series of events that resulted in the demise of Port St. Joe was on the level of Biblical proportions—as if God was pushing the city for corruption of all kinds. As a wealthy port city, it encompassed all the vices that come with that designation. St. Joseph was known as “sin city”. Clergymen from around the country preached that God had destroyed the city.

A Chicago newspaperman wrote: “The sun shone brightly over the wrecked ambitious work of man. Death’s Angel, the hurricane, had completed the work begun by its brother, Pestilence (yellow fever), and buried beneath the sands of the sea, or swept to the four winds of Heaven, all that remained of the proud young city of St. Joseph.” (George Mortimer West in his story published in 1922 entitled, “Old St. Jo.”)

Port St. Joe now stands as a popular small town in which scores of people travel through, especially going to Cape San Blas, FL. It has bounced back in many ways, in particularly with respect to tourism. While it in no way is close to the largest city in Florida, it maintains unique charm that large cities cannot touch.

It is hoped that history will not repeat itself when it comes to the previous series of natural disasters that destroyed The Lost City.