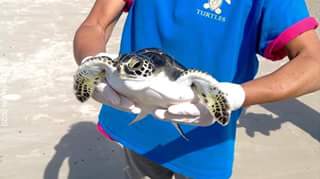 One of the most unique and memorable experiences that a local or visitor to Cape San Blas can have is to watch a sea turtle make its way to nest and lay its eggs on the beach and, in time, watching the hatchlings make their way to the water and venture out on their own.

As the attached chart explains, provided by the Florida Coastal Conservancy, for a small peninsula, Cape San Blas had an active 2015 Sea Turtle season. It is not uncommon for vacationers and locals alike to have the exciting opportunity to observe mother sea turtles and baby sea turtles during the year. After all, sea turtles nest along all the beaches of Gulf County, including Indian Pass, St. Joe Beach and also Mexico Beach (which is actually the end of Bay County).

But, as a person can imagine, both adult and baby sea turtles while on shore are pretty much defenseless and vulnerable to nearly every possible obstacle. That being the case, here are a few tips that help make the sea turtles onshore trek a little bit easier.

Instinctively wise, sea turtles are born with internal instructions to move toward the brightest object on the beach. Thus, in a purely natural setting, the light emanating from the moon or the stars would reflect off the water and should direct the sea turtles to the sea. However, the bright beachfront lights can overshadow the natural lighting of the moon and the stars and disorientate the sea turtles.

In addition to the lighting from beachfront homes or businesses, if while walking on the beach, a person does get to experience sea turtles hatching and flopping their way to the water one evening, as tempting as it may be, please do not use cell phone lights to shine on and view the turtles.

After a fun-filled day on the beach and digging around in the sand, please remember to fill in the holes when everyone retires for the night. Remember, sea turtles are vulnerable to everything on the beach, including falling into holes.

Gulf County has a Leave No Trace Ordinance in place and is enforced by the Gulf County Sheriff’s Office. By removing items off the beach, sea turtles will not run into or get wedged in them. It has been observed, for example, that sea turtles will get stuck under lounge chairs left on the beach.

If there is a marked sea turtle nest on the beach, please do not disturb it or allow a pet to explore the nest.

5.) Florida has 5 nesting sea turtles, all of which are either an endangered or threatened species and are protected by Florida Statues. The five types are:

If you spot any sick, harmed or dead sea turtles, please contact the FWC.